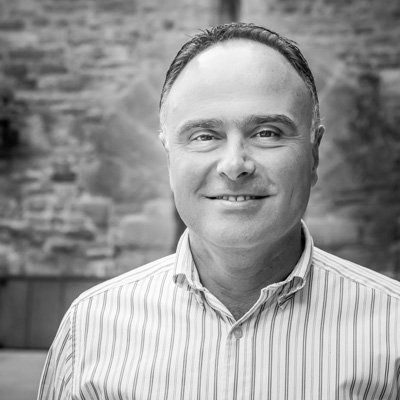 Andreas Drouzas obtained a Bachelor (Ptychio) from the Department of Forestry and Natural Environment at the Aristotle University of Thessaloniki (AUTH) and a MSc from the University College of London (UCL) on “Applied Molecular Biology and Biotechnology”. Afterwards, he did a PhD on “Determination and analysis of the variation of Greek fir (Abies) populations, using biochemical and molecular markers”, which was awarded by AUTH in 2000. An important part of his PhD was carried out at the Swedish University of Agricultural Sciences (SLU) in Umeå via a Marie Curie Fellowship. After having completed his PhD, he worked as a postdoctoral fellow (2000-2002) in the EU-funded project ”Securing gene conservation, adaptive and breeding potential of a model multipurpose tree species (Castanea sativa Mill.) in a dynamic environment - CASCADE” in AUTH (Laboratory of Forest Genetics and Tree Breeding, Department of Forestry and Natural Environment). An intersectoral mobility followed and he worked as a Forest Policy Officer at the Hellenic Ministry of Rural Development and Food (2002-2007). In 2007, he returned to academia and became a Lecturer on “Systematics and Evolution of Native Vascular Plants” in the Laboratory of Systematic Botany and Phytogeography at the School of Biology AUTH. In 2015, he became Assistant Professor. His interests include: DNA-based plant species identification, genetic variation, genetic structure, hybridization, and evolution of plants, glacial refugia and postglacial expansion/migration of plants. Within the Plant.ID project, he is co-supervising ESR13 (Bastien Anthoons).